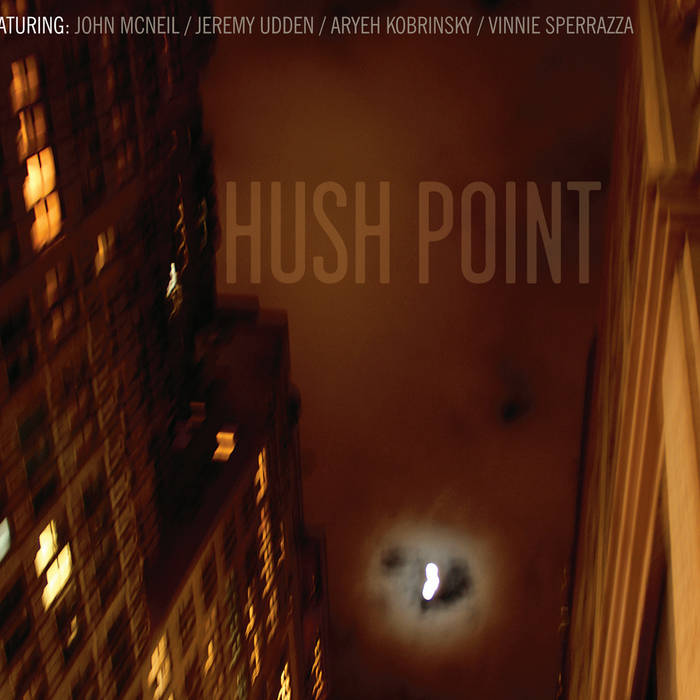 It takes time to develop a deep rapport within a jazz ensemble. Often in today's jazz community, this is not seen as cost effective, and as a result, jazz has become a scene of one-off gigs with minimal preparation and everyone reading the music.

Fortunately, you can still find bands that invest the time to evolve as a unit. Trumpeter John McNeil and saxophonist Jeremy Udden established Hush Point as a group that does just that. Also including bassist Aryeh Kobrinsky and drummer Vinnie Sperrazza, Hush Point is a working and rehearsing ensemble, and on their new self-titled album, Hush Point, the group shows a cohesiveness of concept that is only achieved through hours of practice, performance and experimentation. The wide stylistic range of their repertoire is immediately striking to the listener.

McNeil has had a long and varied career since his move to New York in the 1970s. He began subbing in the Thad Jones/Mel Lewis Orchestra and was a member of the Horace Silver Quintet and Gerry Mulligan's Concert Jazz Band. Eventually he began leading his own groups, recording at least eighteen albums under his own name or in collaboration with other artists. In addition to performing, he works as a composer/arranger and producer.

Udden has developed a unique approach in both his playing and composing. The alto saxophonist has been involved in wide ranging projects – like the Either/Orchestra and Mulatu Astatke’s ensemble – and has played and recorded with legendary musicians like Bob Brookmeyer and Steve Lacy. His ensembles have shown his vastly eclectic breadth, from Ethiopian music to folk-rock.

Though McNeil and Udden had long been familiar with each other on the New York jazz scene, their work together didn’t begin until 2011 when they began to meet for informal practice sessions. McNeil hadn't been aware of the depth and maturity of Udden's writing, and the two found themselves sharing compositional ideas and improvising spontaneous complementary lines. Simpatico in many ways, their styles fit together naturally. For some time they talked of putting a band together and it became a priority after Udden subbed one night in McNeil’s band, where they heard their work shine in a live setting.

They knew that if they put a group together, the drummer and bassist would need to be open to new concepts and willing to rehearse, discuss, and internalize the music.

The drummer would have to embrace the idea of using brushes only, which allows the two horn players to use a wider expressive dynamic range and still be easily heard. The drummer still needed to bring a lot of intensity, however, and Vinnie Sperrazza was up to the challenge. Vinnie enjoys a very busy freelance jazz career which has allowed him to play an astounding variety of music, so the idea of doing something new is just business as usual.

In Aryeh Kobrinsky, they found a bassist who is a strong, expressive player, ready for anything, and another good writer as well. Aryeh is more harmonically perceptive than most, and always thinks compositionally. Whatever direction a piece of music takes, he will naturally give it form and help the overall arc of the performance.

Though McNeil and Udden put the group together, it is now a truly cooperative venture. As a democracy, the ensemble enthusiastically focused on developing their concept. The overall ethic would be a high level of interplay and counterpoint, without traditionally defined roles for each instrument. Energy would be sustained without resorting to sheer volume, unlike the tendency of many contemporary ensembles.

The members of Hush Point disagree with the predominant feeling among jazz musicians that to discuss any aspect of creativity is to somehow make it less genuine. The workshop approach led to discussions that could become heated, but it also led them to develop a common direction and to respond instantly to any new idea.

The recording Hush Point provides a wonderful glimpse into their musical world.

The album begins with clarinetist/conceptualist Jimmy Giuffre’s “Iranic,” a programmatic work, which breaks down the roles of the band members with a series of duets. McNeil’s “Peachful” is a joyous tune full of major chords and reggae rhythm. A tribute to mentor Bob Brookmeyer, Udden’s “B. Remembered” is a subtle, swinging sax-led tune over the chord changes from “I Remember You.” “Bar Talk” is an Udden composition inspired by Béla Bartók’s Mikrocosmos while “Fathers and Sons” presents an older theme of Udden’s that he felt fit McNeil’s sound perfectly. The group improvises over an abstract version of the changes from “Long Ago and Far Away.” McNeil’s “Finely Done” is next, a minor blues with a bridge and a Gerry Mulligan / Chet Baker vibe.

Originally written for his band Plainville, Udden’s “New Bolero” fits the sonic range of McNeil and this ensemble perfectly. “The Train and the River” is another piece by Giuffre, a standard bearer for the ensemble. The arrangement is by McNeil and remains tonal but with more dissonant harmony than the original. McNeil’s “Get Out,” roughly based on “Get Happy,” is a stripped down composition in the mold of the Sonny Rollins and Don Cherry Quartet. The album concludes with Kobrinsky’s “Cat Magnet,” a sauntering country tune as expressive as anything in the genre.

Hush Point bucks many of the current trends in jazz in its concentration on developing innovative dynamics between band members, instant communication and an overall band sound in addition to repertoire. Their new CD is no doubt the first of many.

Bandcamp Daily  your guide to the world of Bandcamp

Featuring Oakland sounds from the Smart Bomb collective and Samplelov.